Skip to main content
Please note: All Wake ReStores will be open during normal business hours.

As experienced by Bill Ahern, CEO of Habitat for Humanity of Wake County

So, here I am, my second week on the job as the new CEO of Habitat for Humanity of Wake County and I’m on a mission to meet the staff at all nine of our ReStores in less than nine hours, covering over 150 miles (see map), and, of all days, Labor Day — a holiday that also just happened to fall on the first day of the month, which is also price change day when additional discounts kick in. I plotted it all so I could start at my home off Creedmoor Road and then make a big clockwise circle around Raleigh, finishing at the Durham ReStore

My first stop was the Wake Forest ReStore and it was crazy. I got there about 10 minutes before it opened and there were already a couple dozen customers anxiously waiting to rush in and see if the items they’ve had their eye on for a while were still there (and with it being price change day, discounted even further).  I go in and quickly introduce myself to Shonika and Zach, but I knew it was best to stand aside and let them get ready to open the store so the frenzy could begin. The doors open and it’s all hands on deck with all staff assisting customers with their purchases. It was a great sight and I was so impressed with how friendly and customer service-oriented our staff were — and to see all those sales being rung up! I had hoped to talk with staff a little bit but that just wasn’t going to happen that morning so I wandered around the store for about 45 minutes and finally asked some customers waiting in line if I could get a quick team picture and be on my way. 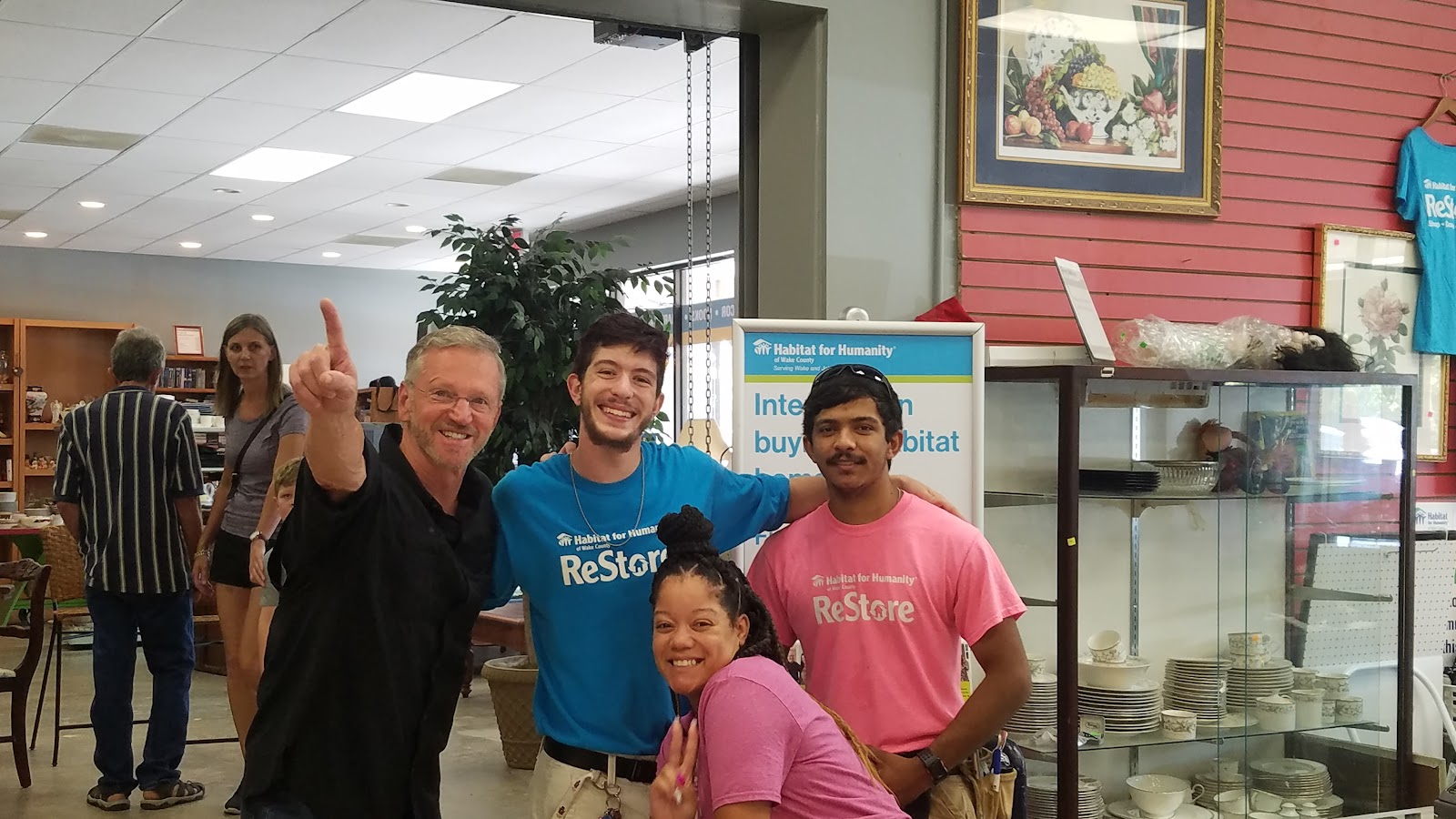 My next stop was the Raleigh Boulevard ReStore, the “BUBBA” of all ReStores.  It is massive at more than 40,000 square feet. It was very busy there too but, with its cavernous size, it wasn’t as noticeable.  I got to talk with Carson who is leaving us for the Sandhills Habitat (sorry to see him go, our loss is their gain) and get help from Todd in rounding up staff (like herding cats I think) for the team photo. But most memorable was trying to pry Anthony away from the cash register for the photo. He just wouldn’t leave his post if he saw a customer on their way to checkout so here again I asked the customers for their indulgence while we took the photo and they were very understanding. But, even after getting the customer’s permission, we still had to coerce Anthony from behind the counter and join us for the team photo. 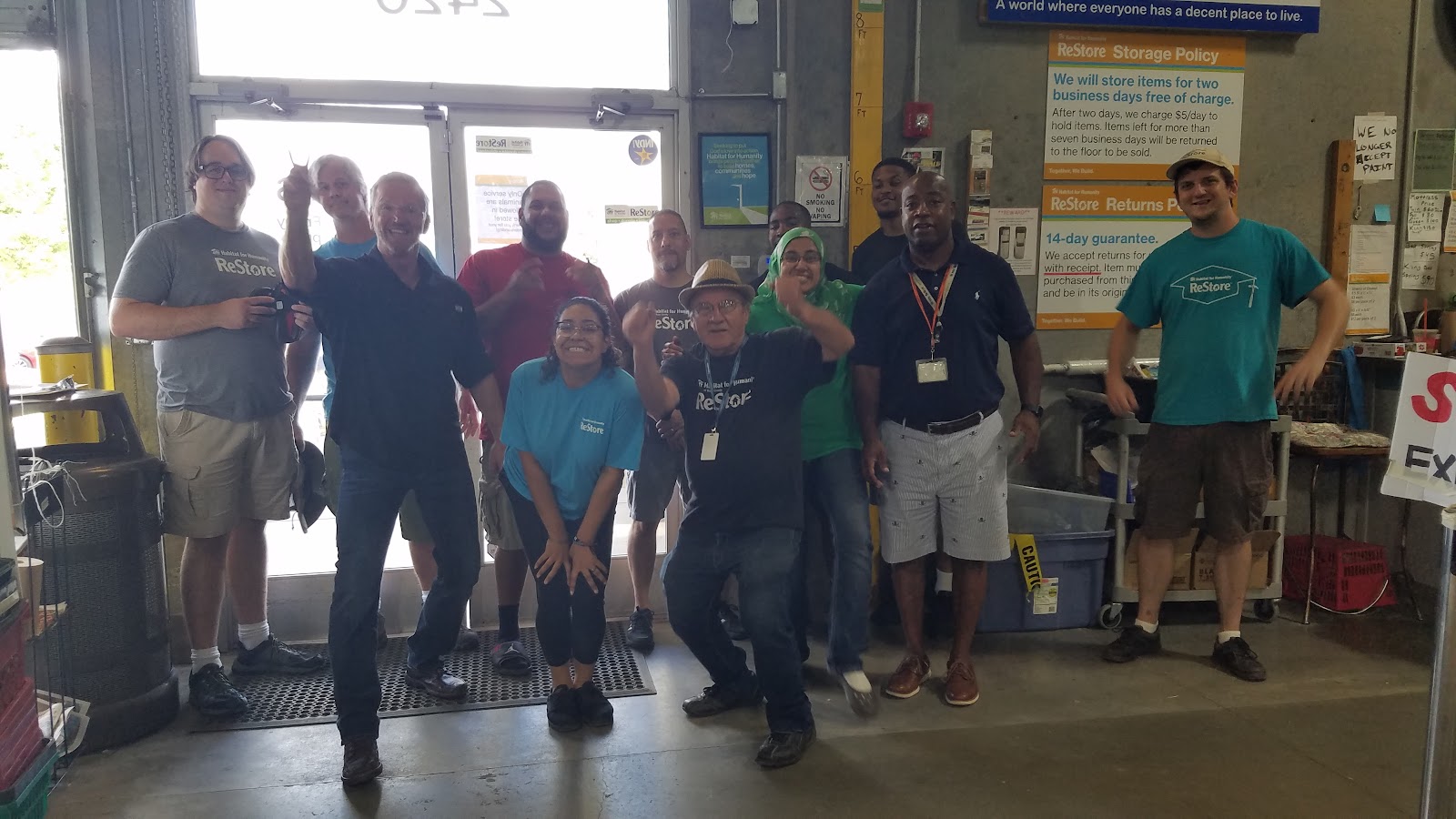 Stop #3 was the Clayton ReStore.  I was met by the manager Ryan, the first manager not to be off that day. I was starting to get a complex so it was good to see him. Ryan and I got share to share experiences about all the moving we did with him being a retired Navy guy and me being an “Army brat” growing up.  Ryan also introduced me to Frank, a long-time volunteer with a great personality and wood-working skills to match. 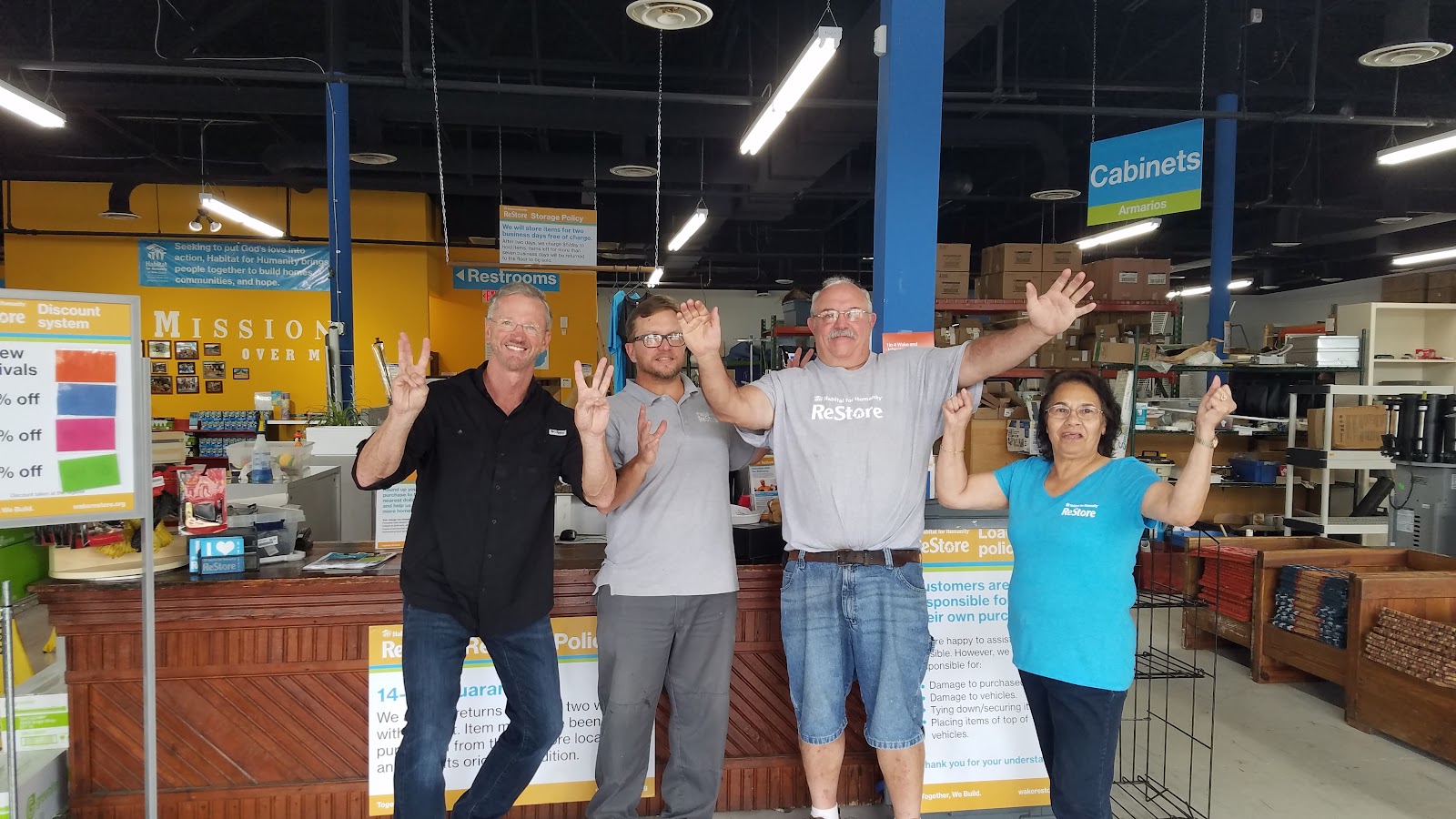 From Clayton, it was off to Fuquay-Varina where I’m sure it was a setup and that Ryan tipped off Lee, the manager there.  So as I walk in and look around, it was very busy and I don’t see Lee at first. Finally, I see him wrestling with this big old washer or dryer, finally getting it on the hand truck and out the door for a customer.  It was quite the scene and I’m sure there was a lookout person tipping Lee off that I was coming in the store and to make it look good! Very impressive it was and a good workout as well. The other thing I will remember about FV was how it was busting at the seams with so much merchandise.  Lee was a bit distressed about not having enough room to make it look more organized but hey, as long as the customers are happy and sales are booming, then life is good as they say. 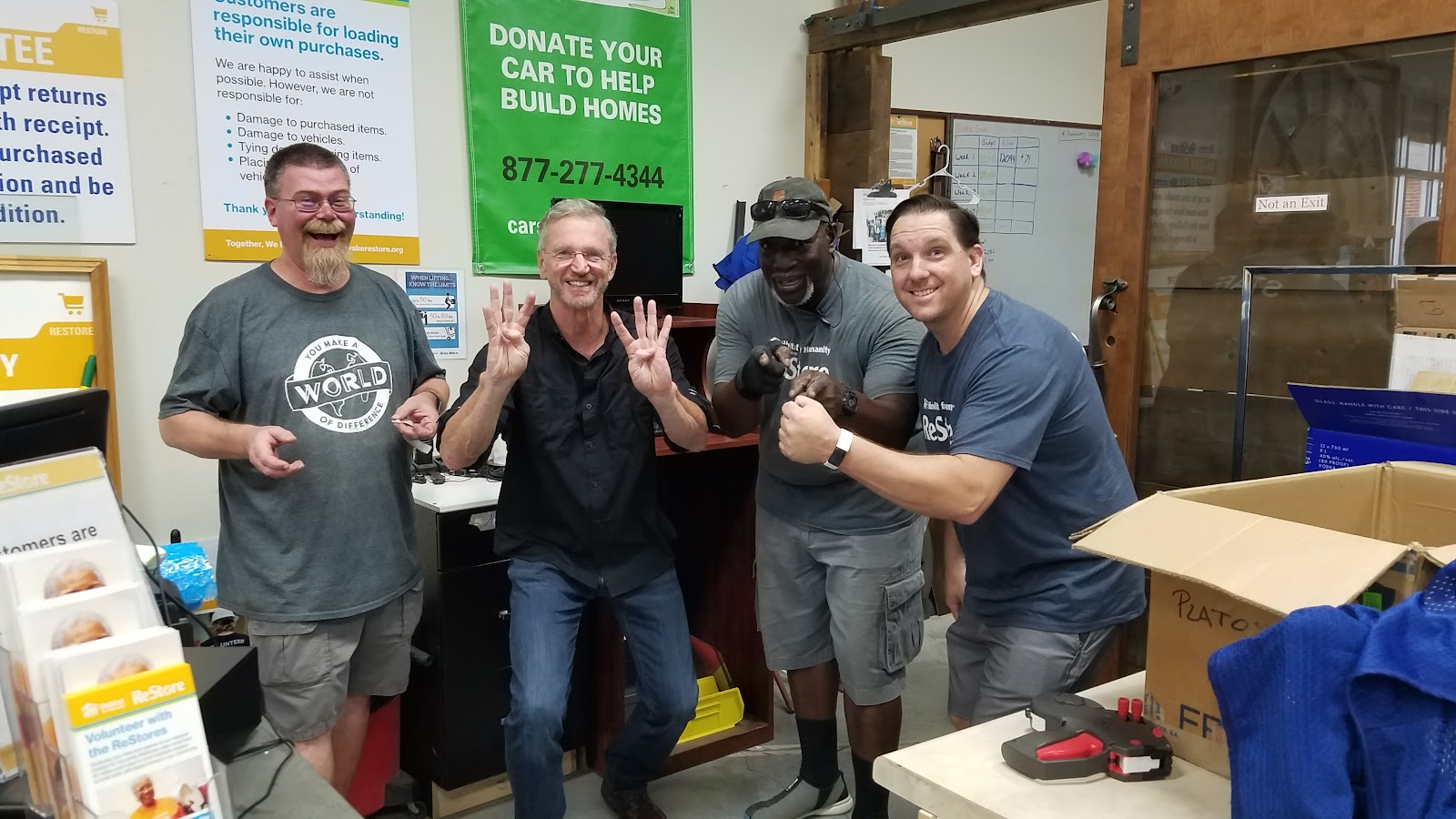 Next up, Apex, where I was met by Brad.  It was a rather small ReStore, comparatively speaking, but the light is at the end of the tunnel in terms of expansion.  Brad took me next door where renovations were underway to convert that space into another 6,000 square feet of retail space.  Can’t wait! I’ll also remember this store for the lovely British accent of the cashier, Jen. Very charming! 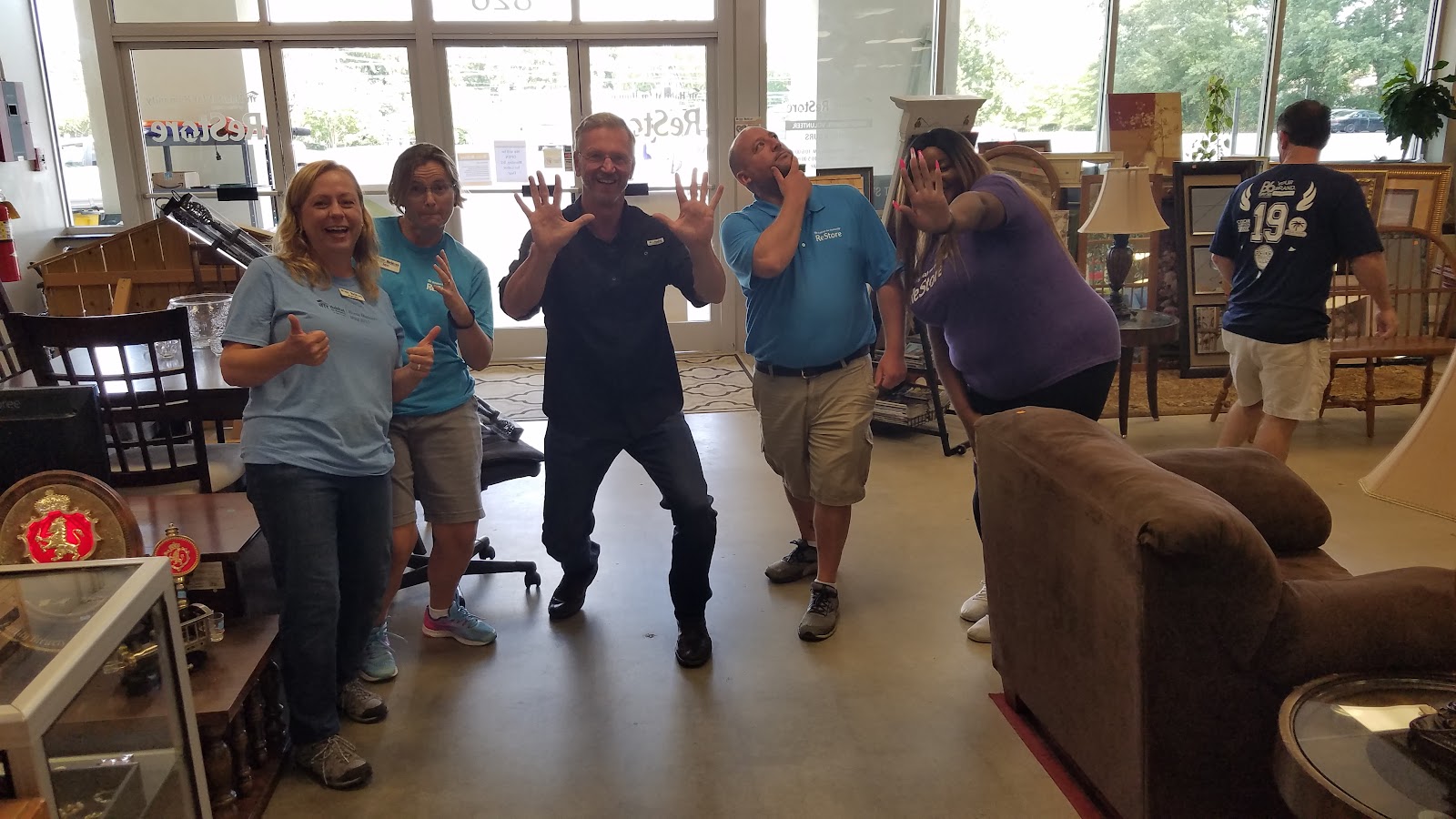 Store #6 was Cary and it was full of activity and full of personalities. From the get go, I was met by the ever-smiling and abundantly happy Ellie, the Cary ReStore Manager. And then I was introduced to Lori who was a self-proclaimed hugger. A handshake simply wouldn’t do so I got a great big hug.  And then I got to meet Rich who is quite the character (in a good way) but is quite the challenge to describe in words. He’s just one of those guys you have meet yourself. All in good fun and everyone was so cheery that I began to wonder if they were all drinking from the happy juice cooler somewhere in the back.  I want me some of that! Oh, and one more thing. Congrats to Ellie for selling me the only item I bought all day and that was a dining table. I probably would have bought more but, without my wife, Beth, with me, I was too afraid to commit. 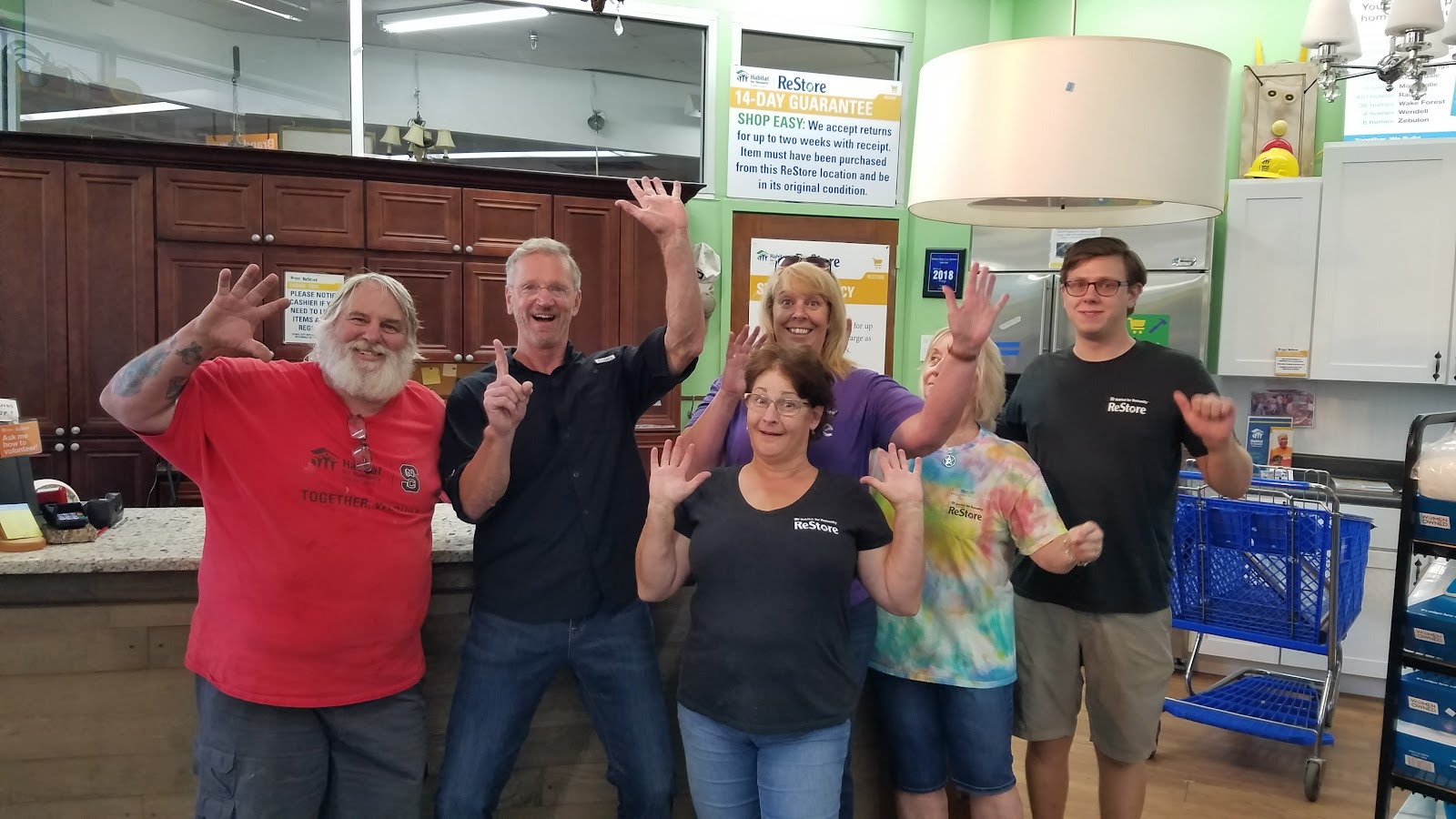 And then, it was off to the Glenwood ReStore.  A few weeks ago, my wife and I stopped by to check out the store but was told the store manager, Alex, was off that day.  No worries, so my wife and I got to meet Jason and really enjoyed the conversation. But again today, I’m told Alex is off.  Hmmmm??? Note to Alex — sooner or later I’ll catch up with you. Anyway, at this store I was really struck by how new most of the staff were.  But everything seemed to be well under control. 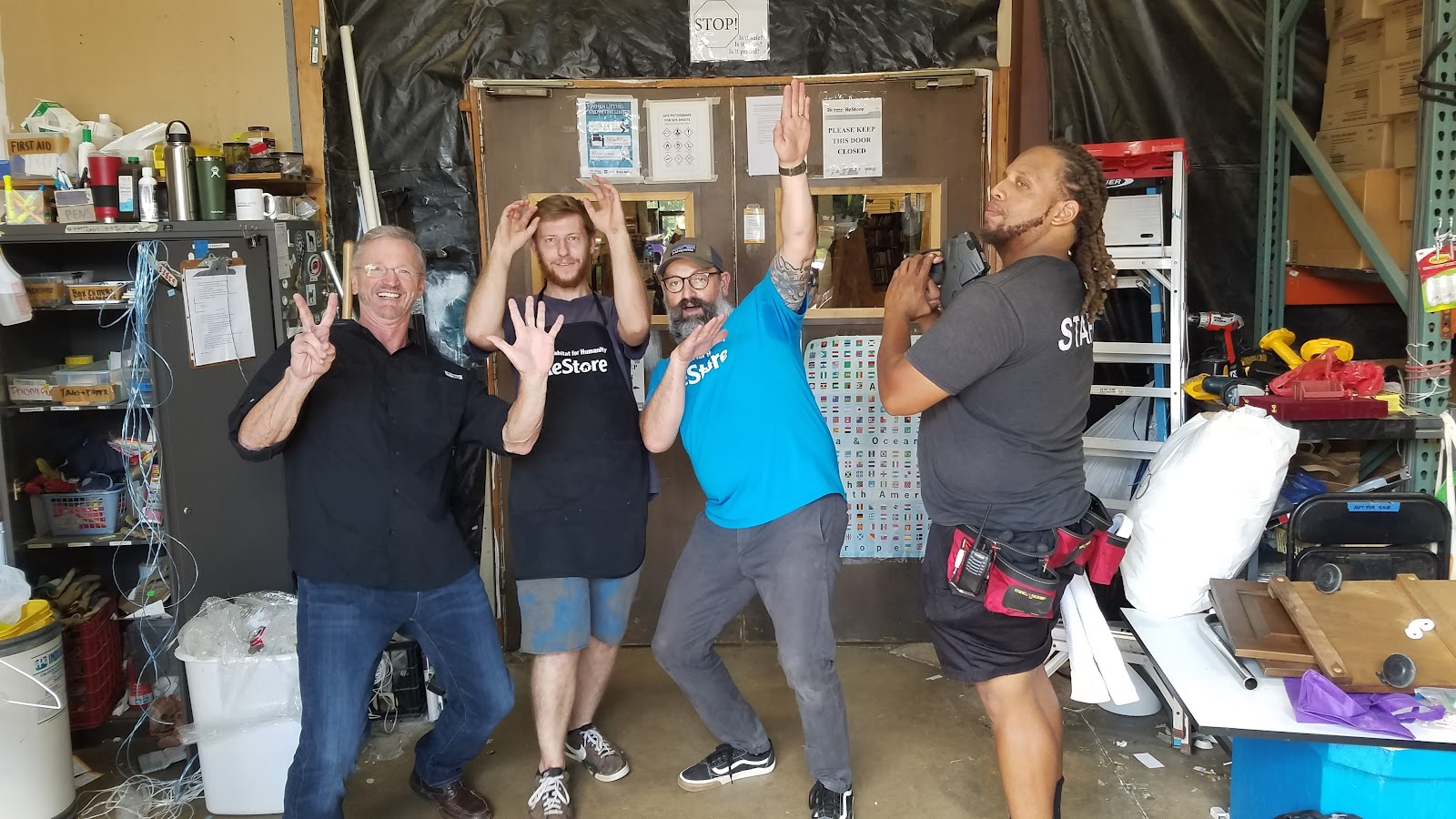 Off to Store #8, the brand spanking new one, Morrisville. The Taj Mahal of ReStores. What a beautiful new store!  You could just see all the potential for that store to rock it! I can’t wait to go back for another visit when it’s fully stocked.  TJ and his crew were such good sports, especially with the team photo and that came through in the shots taken. Nice job and see you again soon. 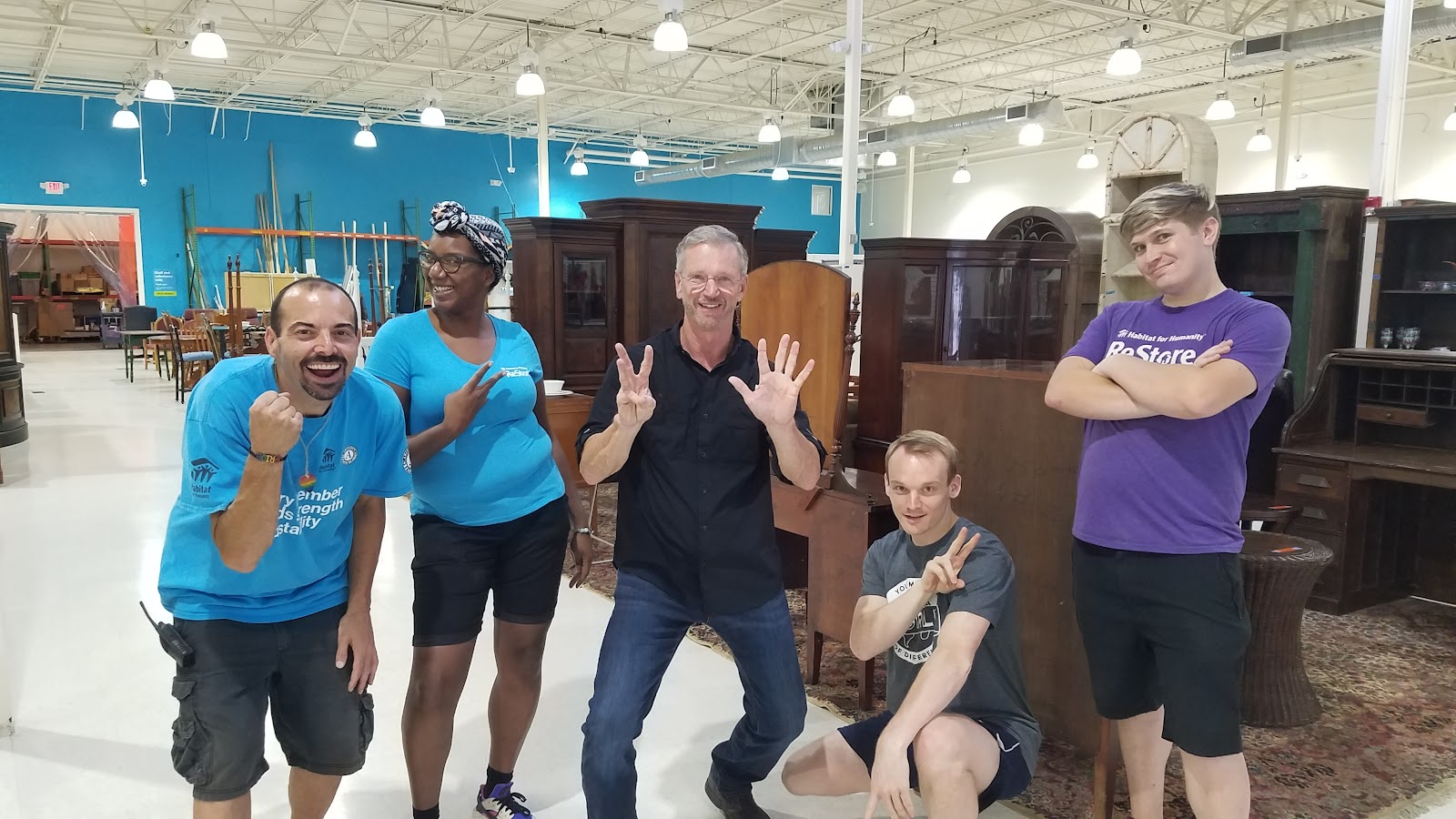 My last Restore, Durham!  What a huge space and lots of great stuff!  I was met by a very friendly cashier who goes by Ty.  Luis then came and got me and introduced me to all the staff.  Again, just like all the ReStores, everyone was so friendly and welcoming.  Great people!! Luis gave me a great tour and shared some of the history of the store with it all being very impressive! 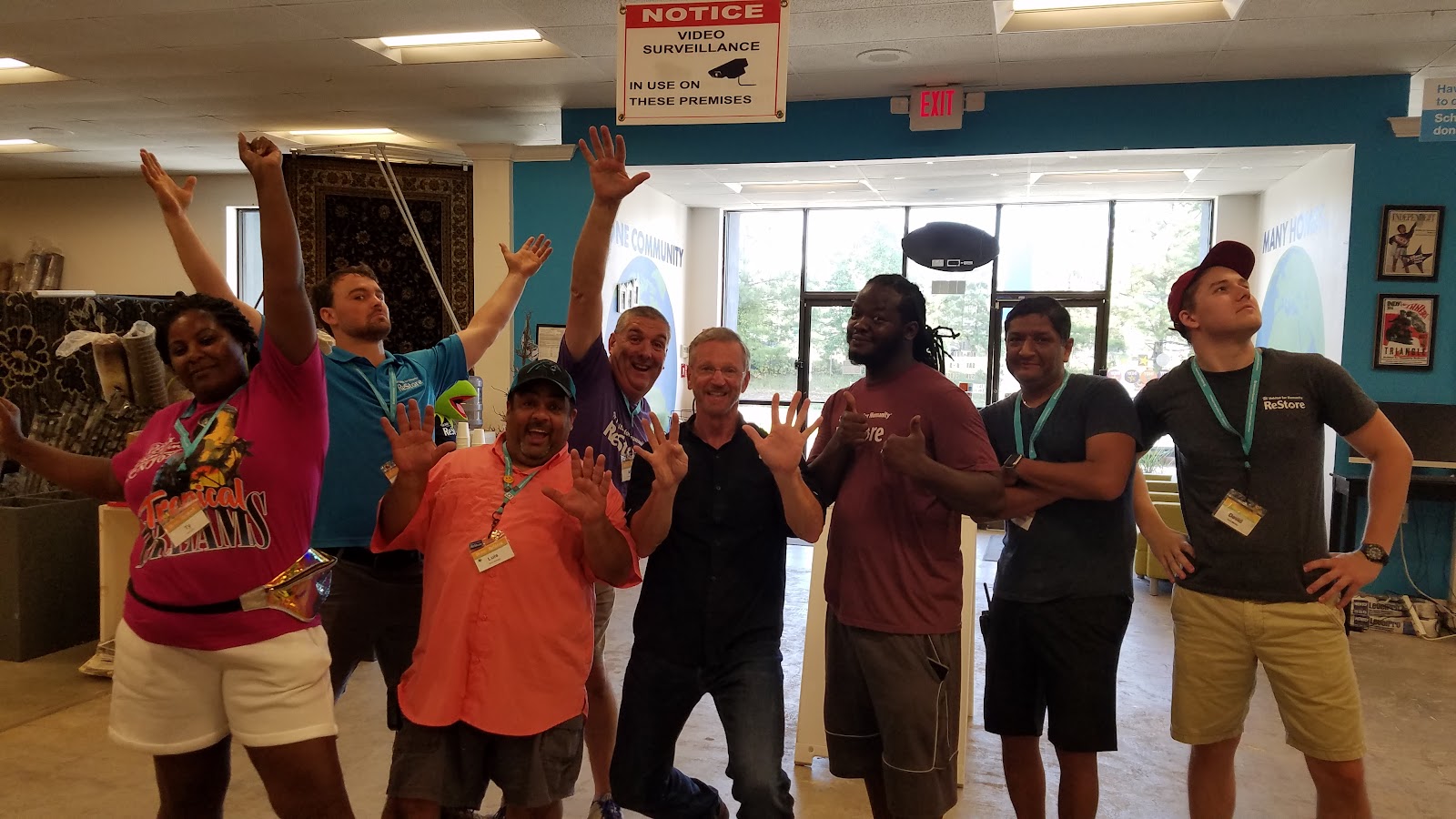 So, my day began a little before 10 am when I got to the Wake Forest ReStore and ended a little after 5 pm at the Durham ReStore.  I did it! Nine ReStores in one day. And, I have the pictures and the punch card to prove it. Many, many thanks to all the staff at all the ReStores for the warm and friendly welcome I received and for indulging me with the team pictures.  I must admit, though, some of you are quite the “hams” 😊  Thanks for a great day and a day I will remember fondly.  ‘Til we meet again!